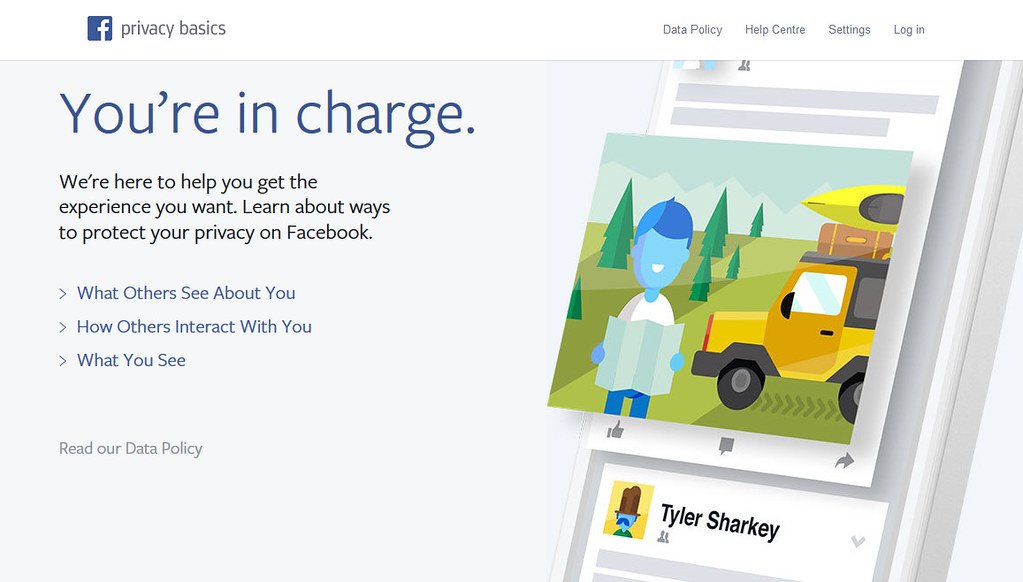 Am I really in charge?

Following all the criticism regarding the complexity of its terms of service and privacy policy, and allegedly in order to get more people actually reading and understanding the terms which must be agreed on for the use of the service, Facebook has announced, last month, an update (yes, again) of this privacy policy. But this time it is a visually clearer, shorter, linguistically simplified and more understandable version. If you have a Facebook user account, you certainly have already received a notification regarding this update, which will enter into force on the 1st January 2015.

In a section entitled ‘Privacy Basics’, users are told how to control what is to be shown to others, how they might interact with others and what may be shown in their news feed, how to control the visibility of their profile, and how to deactivate or delete their account. This new policy even includes a childlike assistant to guide users through these explanations.

However, not much changes, actually. Indeed, this more user friendly appearance does not really give users more control over their data. In fact, it does not give much. Users might control their data regarding others but Facebook and its commercial partners are certainly not included in the concept of ‘others’. The reading of the data policy regarding the type of data which is collected and the use of such data is quite self explanatory in this regard.

To be sure, the users’ settings haven’t been changed. Nevertheless, on a positive note, the user gets now to better understand how Facebook tracks its users. For instance, it is specified that Facebook may collect location information from users on its mobile apps through GPS, Bluetooth or WiFi networks.

In this regard, although users can decline or opt out of sharing information with third party applications or for targeted advertising purposes, which are based on their browsing habits off of the network, they have no control regarding the information that is collected and shared. To be true, no changes were made regarding how much data Facebook collects from its users.

In fact, Facebook has entire access to all the information made available about their users, both provided by users themselves while updating their profiles and by their friends. Moreover, Facebook can use this information namely to provide and develop its Services (yes, with a capital letter) and to promote and evaluate successful advertising. Unless entirely unconnected from the platform, as it does not suffice to close the tab, Facebook is therefore able to access all information provided in websites or applications which use its Services, gathering data on websites visited by its users and their behaviour on those websites. It will be, for instance, the case of Instagram or Whatsapp.

Likewise, as Facebook now accepts payments to be made on the platform, it can use information people share regarding their purchases and financial transactions to better target advertisements. For example, according to the update, the company collects information on each purchase, including payment information such as credit or debit card data, account authentication information, billing, shipping, and contact details. In addition, users are not given the option to control what information is being used for advertising purposes.

Furthermore, users can customize their ads preferences in order to make the advertisements which are shown to them more relevant. Therefore, a user will be able to decide whether or not to see advertisements based on a peculiar interest. While most users may appreciate this new option, the main beneficiary is ultimately Facebook itself as it allows advertisers to differentiate among successful and irrelevant ads. However, it must be noted that users will still not be able to control the data collection resulting from targeted advertising, but only to control how much targeted advertising is presented to them.

What is more, Facebook continues to get location information in order to allegedly present more relevant information regarding, for instance, friends or restaurants nearby. As you may know already, if you at some point read the previous version of the terms of service, advertisements were usually presented based on the location listed in a user’s profile. Facebook now proposes to enable advertisers to target users based on their actual location.

Thus said, Facebook has always been associated with issues regarding its privacy policy and terms of service, which were always deemed to be too complex for the common user. However, I believe that this complexity was not the main cause why most of its users are not aware of the use purposes of their data. My experience tells me that, disregarding how simple they are, and contrary to their best interests, not many people will actually read any terms and conditions of any service. Similarly, these updates on the terms and conditions will certainly not be read by many. And for those who will, it will surely not make them turn away from the social platform.

Facebook is already a very relevant part of its users’ lives, businesses and online interactions. Perhaps most users have accepted that, beyond being a space where friends and family can interact, it is primarily a business intended to deliver effective advertisements by using the information provided by its users. Or perhaps people just don’t care.

Nevertheless, it must be noted that the consent given by users do little in regards of their privacy. Individual consent is rarely exercised as a meaningful choice. And by ‘meaningful’ I mean with awareness and understanding of the implications and consequences of their consent.

Either way, the outcome is as follows: while people continue to use Facebook to interact with their family and friends, Facebook is not the product. Users are.

CCTV: household security or how to be a data controller at home